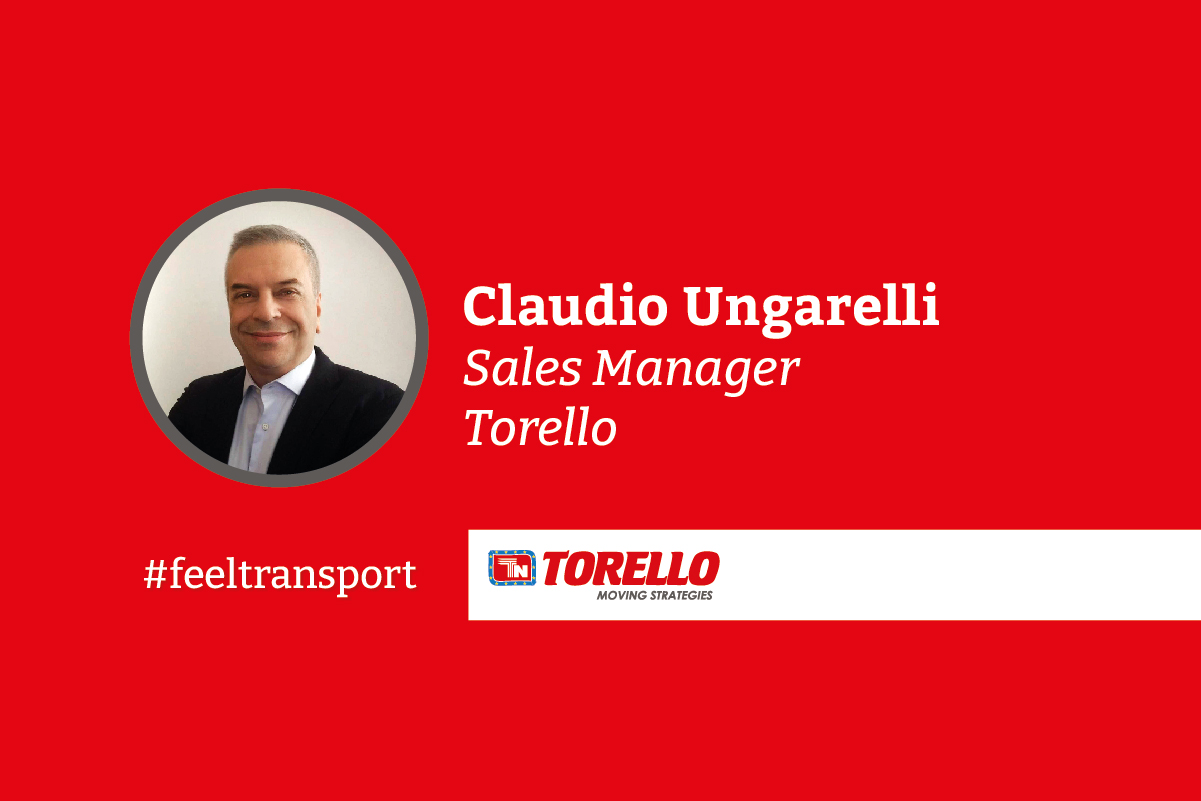 He likes to be listened and in facts he has a lot to say. The working story of Claudio Ungarelli – Sales Manager – is articulated through endless experiences, a journey that begins from a different world than logistics.
“I worked in Hasbro in Milan, the first toys company in the world, and we depend directly to London. I was in the commercial area, at the beginning in Emilia Romagna, Triveneto and then north Italy. For a Hasbro director’s familiar vicissitude I found myself in the newborn Topco consortium. Well, for a curious intersection of cases I was there”.
What an experience was logistics, it could be a question but it is a statement! And, as we saw in other stories, it’s a job that could happen case by case. Speaking of Claudio, it happened just like that.

Your relation with Torello. When was it born and how it evolved.

I entered in Torello when Topco consortium was acquired (2017). I had to retire but Umberto Torello convinced me with such enthusiasm that I went to Montoro and Senec where I saw a totally different status, a family. In the company I was a tutor for people who then became totally autonomous. Achieved that challenge, I was ready for something else. I asked for something stimulating and Umberto gave me more responsibility towars FTL sector in north Italy, where we grew by almost 25%.
At the times of Topco, I was also an administrator of the Imola platform, today, thanks to Umberto, I interact directly and share customers with all the offices and confronting with colleagues is something that I love.

Dynamic. For the ability to create a planning that is always new, renewed. Every project is a project for the future that starts from a green vision. We don’t think about immediate answers but about wider long-term strategy.

Ambitious. Here, when achieved, there’s always a new challenge. This approach characterised the same family, with them every project you put on the table is always welcomed. Even myself, I have taken the big opportunities.

Unified. Torello is a solid company, set to a more equal dialogue that reinforce unity.

Today commercial activities in Padova and Verona, Bologna and part of Florence. On Emilia Romagna we have a total coverage.

I participate to all the offers, the tenders, I keep doing marketing and pricing that is the most difficult part.

From my point of view, I had the chance to see in Torello a correct, organic, linear evolution, because it touches all the transport world. I’ll explain better. In the transport world there were historically two people: completist and the one linked to groupage, that today are unified into one figure because the complete load was apanage of “poor” goods while all the other goods became apanag eof the groupage, as Anglo-saxon tradition. It is a revolution made in the 90s and that considers the warehouse not as a resource but as a cost.

In this scenario, if before the sales managed for the 65% the normal trade and for the 35% the GD, today everything has changed because GD takes the same amount of goods three times a week!

From your experience, what advice do you give to the ones who look towards the company?

Being able to reinvent yourself, just like Torello did, it was able to change skin, follow the evolution of distribution channels. This is thanks to a Group where everyone works with desire and optimism, peacefully, with the holders. In other cases the holders’ presence is seen with terror, here when they arrive in the office there’s an affectionate word for everybody.
Torello has preserved the features of a familiar company and that allows people to freely carry a proactivity out in a climate of confidence.

Are there some aspect to improve?

Yes, in every realities you can always improve. If some bolts were tighten with a major control to procedures you can optimise waste.

Would you still choose this job?

Yes, and it couldn’t be otherwise.

Sometimes you meet people with a lot of years of experience that still talk with the same enthusiasm of the beginnings. These are the ones that teach us to have the courage to change, to jump, not being afraid of new things.